The Credit Karma iOS application is designed to allow users to stay on top of their credit information. The application allows user's to see their trending credit score, accounts, balances, etc. Obviously, if this information were to fall into the hands of unauthorized individuals, it could create quite an identity theft problem for Credit Karma's users. Being a devoted user of the application myself, I wanted to write this post to bring attention to this issue, not only to protect my own information, but to help others protect theirs.

The vulnerability in question lies in the fact that the Credit Karma iOS application stores the user's credit related information, in an unencrypted format, within a locally stored Cache.db file, within cached data files and within the iOS keychain. On a non-jailbroken iOS device, the keychain storage isn't much of a concern, because the keychain itself is an encrypted storage location. However, it is quite easy to access the Cache.db file, as well as the cached data files on a non-jailbroken device using an app called, iFunBox. Additionally, on a jailbroken iOS device, it is effortless to dump the contents of the keychain, using Ptoomey3's keychain_dumper, and identify any clear-text information that is being stored within it.

If you have the Credit Karma application installed on your iPhone or iPad (running iOS 6.x or lower), your credit information, as mentioned above, is being stored within these three locations. In the event your device was stolen it would take less than 20 minutes for an attacker to jailbreak your device, install ssh, install the keychain_dumper utility and gain access to your credit information. And even less for time for an attacker to gain access to the Cache.db and cached data files. Once jailbroken, all an attacker would have to do is issue the following command:


The result of this command would reveal the following:


I have naturally chosen to not show my sensitive credit information! However, below is pseudo-info that would be found within the keychain:


Grabbing this information from a non-jailbroken device is quite easy using iFunBox. Simply extracting the "Caches" directory from the device reveals the sensitive data is also being stored within the Cache.db file, which is located on the device at /Library/Caches/com.creditkarma.mobile/Cache.db: 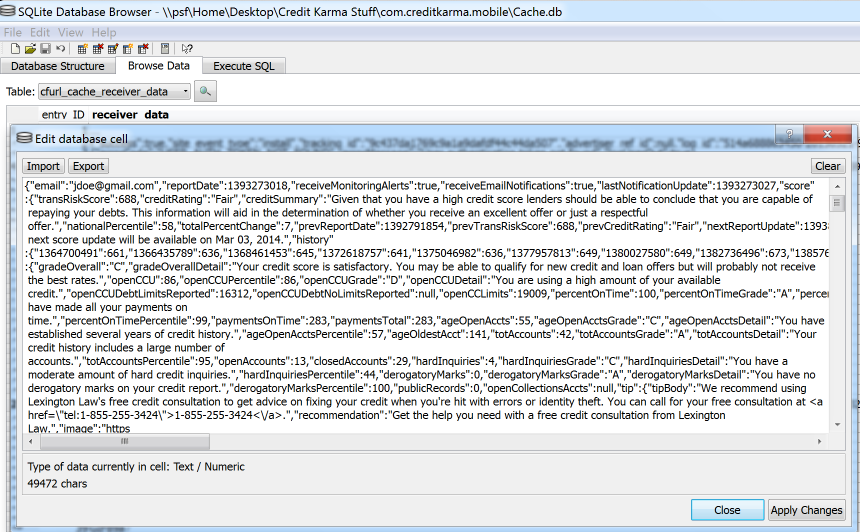 And within various files contained within the /Library/Caches/com.creditkarma.mobile/fsCachedData directory (these files were identified on my non-jailbroken iPad running iOS 7.0.6, but not on my jailbroken iPhone running iOS 6.x): 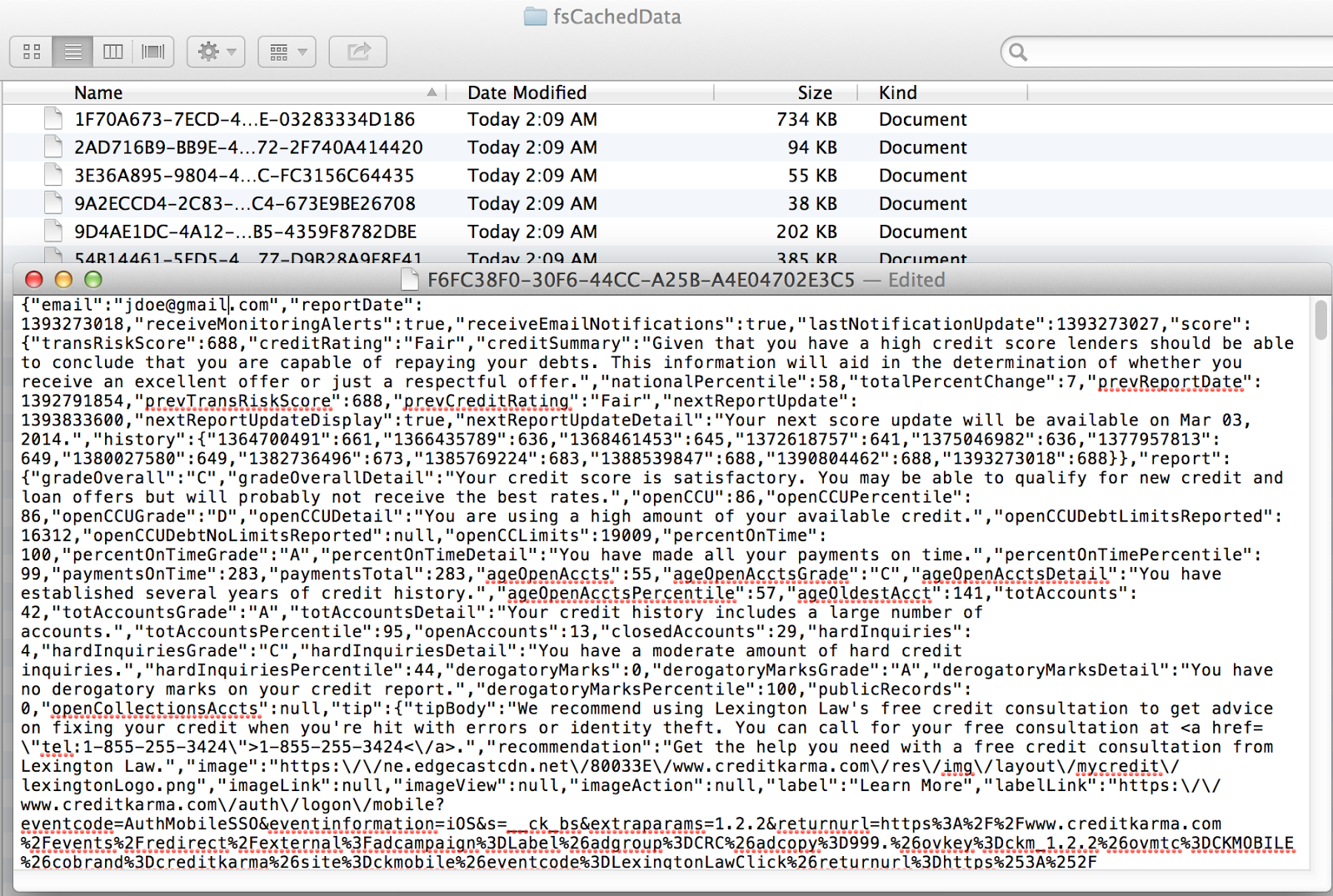 Additional data is available, but I think you get the point. As a penetration tester this would rate as a low to medium risk issue in my opinion, since it requires physical access to the device to obtain this information. However, even a lower risk vulnerabilities, can escalate and cause major issues for people.

All subsequent emails I have sent asking for an update on this issue have gone unanswered.

Update: After sending the Credit Karma twitter account a link to this post, Credit Karma finally responded to me today (Feb. 25, 2014). I asked if they had read this write up regarding the vulnerability and their response was, "Yes, I sent your post to the appropriate people and the issue was escalated within the company when you first reported it. Thanks."